Ben Carver builds an award-winning career at Fairfield-Suisun Sewer District by learning the business, enhancing his skills and training other operators and technicians. 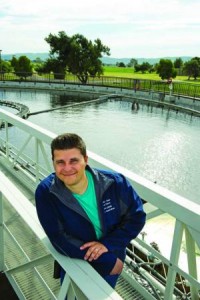 Ben Carver loves the wastewater industry. As an operator/maintenance technician 5 at the Fairfield-Suisun Sewer District in California, Carver is focused on expanding his knowledge while helping fellow operators develop the skills they need to advance their careers.

After just nine years in the business, Carver has parlayed his passion for wastewater into a senior role at the district’s 23.7 mgd (design) advanced secondary wastewater treatment plant. Sited on 300 acres, the facility operates under reduced flow (14 mgd) due to California’s five-year drought, water conservation measures and the San Francisco Bay Area’s economic doldrums.

Carver, a Fairfield native, is serious about his role in producing clean water for the 41-square-mile area of Solano County that comprises the sewer district. It includes the cities of Fairfield (population 108,000) and Suisun City (28,000) as well as Travis Air Force Base.

Beyond kudos from colleagues and supervisors for his dedication to training new and mid-level operations and maintenance technicians, Carver has gained broader recognition. In 2014, he received the Plant Operator of the Year award from the 9,000-member California Water Environment Association (CWEA). Earlier in the year, he won the same award for the CWEA’s Redwood Empire Section.

“It’s nice to have a career filled with accomplishments,” says Carver. “But I can’t take all the credit because it’s really a team effort. Much of the success I’ve had is based on the great people I work with. All 58 sewer district employees, including our 14 treatment plant operators, function as a team to achieve great results for the community, so it’s everybody’s award.”

That assessment draws some pushback from Brian Hawley, operations manager and Carver’s boss for the past six-plus years: “Ben is the new model of an operator. He’s passionate about the wastewater field and our commitment to protect the public and the environment. He’s technically savvy and eager to learn new technologies.” 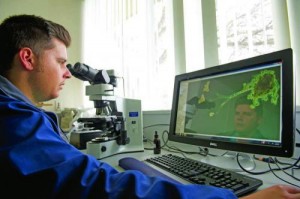 Carver’s interest in wastewater began when he was 15 and trying to figure out what to do with his life. A family friend who worked for the City of Fairfield Water Department described life at the water plant, leading Carver to look at classes at Solano Community College. The first one he found happened to be about wastewater, so he enrolled and decided to make it his career.

At 18, he volunteered at the Fairfield-Suisun Treatment Plant. After graduating from Vacaville High School in 2005, he landed a job at the plant with contractor United Water. In July 2008 he joined the sewer district, where he has made professional development a priority. From then on, every year, he has advanced his state certification, starting with an operator in training certificate and culminating with Grade V in 2011.

“Wastewater is a wonderful career,” Carver says. “It’s rewarding and something that keeps me constantly motivated. The fact that I always learn something new is one of the big blessings of this profession. I’m never bored, because my job changes all the time. Plus, I’m able to support my family, and there are plenty of opportunities for advancement, so yes, I like what I’m doing a lot.”

Another project was a dewatering upgrade in which Carver and his colleagues replaced old filter presses with a screw press (FKC Co.), replaced two dissolved air flotation thickening tanks with gravity belt thickeners, and built a circular primary clarifier to add capacity to four existing rectangular clarifiers. In 2011, the plant switched from chlorine to UV disinfection (WEDECO – a Xylem Brand).

A typical day for Carver runs from 6 a.m. to 4:30 p.m. Each day is different, but he usually supervises the morning meetings and briefings from graveyard shift operators, checks the duties for the day, and assigns tasks. Carver supervises the lower-level technicians and provides training when needed.

Training covers wastewater treatment processes, equipment handling, plant maintenance and other aspects of the job, such as maintaining the district’s four main pump stations that deliver wastewater into the plant, nine lift stations and eight stormwater stations throughout the area.

Gary Crawford, a Grade III operator, can attest to Carver’s training expertise. A five-year plant veteran, Crawford came from an academic background and pursued a career at the university level. “The money wasn’t that good and the jobs just weren’t that plentiful, so I made a financial decision not to spend time trying to get published and get tenure for a small salary. I have a wife and wanted to earn a decent living.”

Crawford didn’t know much about wastewater, so Carver trained him, starting with basic treatment procedures and eventually preparing him for certification exams. “Every time I’ve had to take one, I hook up with Ben and we go over the math work,” Crawford says. “Then he walks me through what I need to know. He’s been an enormous help, for the tests and in becoming a skilled operator.”

Hawley praises Carver for making sure the other operators are moving up in their certifications: “Of the 14 operators we have, all but one are Grade III and above. There are five of us with Grade V certification, so we have a highly certified staff.”

Carver has little time for accolades. He’s too busy doing his job: leading the operations team members as they work on the oxidation towers and dual-media tertiary filtration system, and making sure the solids dewatering processes — screw press and asphalt-lined drying beds — function properly to generate 7 to 8 dry tons of biosolids daily.

He also helps conduct plant tours for elementary, high school and college students, promoting the satisfaction he feels from protecting the area’s fragile ecosystems. That includes reclaiming 10 percent of plant effluent to irrigate turf farms or livestock feed and to replenish ponds for local duck clubs.

Looking ahead, the treatment plant faces stricter nutrient limits from the Regional Water Quality Control Board and the U.S. EPA. Carver relishes the challenge as he continues to improve his skills and look for ways to improve plant operations and efficiency.

“There’s no question that all the plants, including ours, are going to see much stricter limits on nutrients,” he says. “We’re already doing full nitrification and partial nitrogen removal, so we’re a little bit ahead of some plants. As for me, I enjoy my work enough that I’ll keep doing it. In this industry there are so many different avenues to pursue. I’ll stick with it for the rest of my career.”