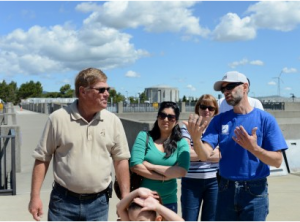 FAIRFIELD — Earth Day got celebrated in many ways this weekend with a cleanup in the Suisun Marsh and along area creeks, events at the Civic Center Park and a tour of the Fairfield-Suisun Sewer District’s treatment plant.

The plant serves 135,000 residents in the Suisun City and Fairfield area. The amount of wastewater from homes, businesses and commercial users traditionally adds up to about 15 million gallons per day going through the system, but that’s not currently the case.

“It has actually gone down over the last year to about 11 million gallons per day,” said Helen Gaumann, director of administrative services. “That is because of the drought.”

While the plant serves everyone who lives and works in the two cities, its out-of-the-way location on Chanbourne Road gives it an out-of-sight, out-of-mind kind of existence. That’s something plant officials and staff sought to counter on a day set aside to bring awareness to the health of the planet.
“This is the first time we have had a grand opening tour of the plant for Earth Day,” said General Manager Greg Baatrup. “We wanted to get the public out so that they can see what we do.”

Baatrup has worked for nine years at the plant and said he loves his job. The Fairfield-Suisun Sewer District has been a local provider of steady work for many of the employees who can say that they have worked at the plant since getting out of college.

The plant is situated on several acres of grassy plain near the Suisun Marsh.

“People came out today to learn about what happens here,” Baatrup said. “I am really pleased how many people have come out.”

In addition to the sewer tour, plant workers also hosted a booth at the Fairfield Civic Center for the city’s Earth Day activities and went out for cleanup activities in Fairfield and Suisun City. Back at the plant, they offered visitors refreshments and drinks.

Robin and Mike Westfall of Fairfield have been residents since 1975 and have done tours of the Jelly Belly factory and Anheuser-Busch brewery, but this was their visit to the treatment plant.

“It was a first-class operation,” said Mike Westfall. “It’s good to know instead of using chlorine they are using UV lights. It’s safer and not a target for terrorists.”

The wastewater disposal plant discontinued using chlorine because of safety issues for storage but also because releasing the treated wastewater into the marshlands with chlorine could harm the marsh, Sortor said.

“It’s good to know they are protecting the marsh,” said Robin Westfall.