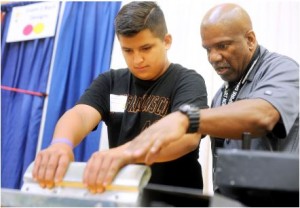 SUISUN CITY — Leslie Ruelas, an eighth-grader at the Public Safety Academy, got to sample life as a screen printer Tuesday morning at the second annual Inspire: Dreams Start Now Interactive Career Fair at the Kroc Center.  The event, a partnership between the Kroc Center, Fairfield-Suisun School District, the Fairfield-Suisun Chamber of Commerce and the cities of Fairfield and Suisun City, is open to eighth-graders. More than 1,600 students were expected to attend.  With assistance from Charles McCullar, owner of Front2Back Designs, Ruelas created her own souvenir, a white T-shirt with a logo for the event designed by McCullar.  Prior to putting the shirt on the screen printer, Ruelas said she learned how much pressure it takes to get the design on the shirt and how to work with multiple colors.  “They don’t learn this all at one time,” she said.  Ruelas, a self-described art lover, said she could she herself in the business. She’s not ready to decide yet because she also has a passion for nursing and law enforcement.  Front2Back Designs gave out 200 T-shirts last year at the career fair. The company was on track early Tuesday morning to meet that number.  Dionne McCullar said the students’ enthusiasm was obvious.  “This shows them different options and avenues,” she said.

A few booths away, fellow PSA student George Estes listened as Alex Haynes, co-owner of A Squared, a video production and marketing company, talked about his work and showed off some cinematic lenses.  Estes said he would like to get into film as a career. He and his fellow students make their own videos now for class projects.  Haynes saw his role Tuesday to inspire and encourage youth to think outside the box. It was also a chance to give back to the community that helped him and co-owner Alex Quinn launch their company.  “As a kid I wanted to be an actor,” Haynes said. “My parents told me, ‘no.’ ”  He’s now found his passion behind the camera, not in front of it.

Leon Ingram, from the David Weir Preparatory Academy, dreams of playing for the Chicago Bulls one day. Tuesday he learned about working at the Fairfield-Suisun Sewer District.  Meg Herston, an environmental compliance engineer, and Nellie Dimalanta, a geographic information system technician, demonstrated, with help from the students, what happens to items flushed down drains.  Ingram poured the ammonia for the demonstration.  With a miniature model of a clarifier, the students watched the oil and grease stay on top, the heavier items go to the bottom and the clean water remain in the middle.

Debi Tavey, president of the Fairfield-Suisun Chamber of Commerce, said the event makes her feel good about the future.  “They are so interested in the businesses here,” Tavey said of the students.

Jerome Spaulding, who teaches at Oakbrook Elementary, was impressed with an addition this year – a passport to help the students explore the fields that interest them based on personality questions.  “They can learn a lot about of variety of jobs that fit their personality and desire,” Spaulding said.